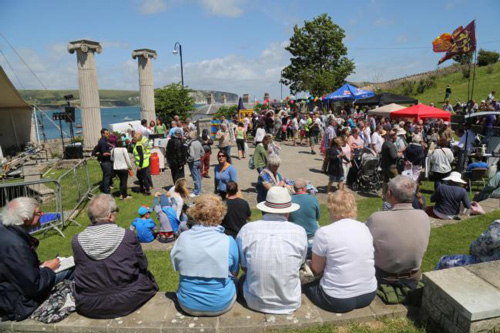 The Swanage Fish Festival is about celebrating all things ‘fishy’. This fun packed festival features fantastic food and entertainment for the whole family, it’s truly a fantastic day out. Following the success of the festival in 2015, the event returned this year promising to be even bigger and better featuring more stalls, more chefs and more fish!

Where is The Swanage Fish Festival?

Well, it’s in Swanage! Held over 3 days at the spacious Prince Albert Gardens there was plenty to eat, see and do this year. The festival featured many cooking demonstrations and classes by professional chefs and of course mouth-watering seafood to please everyone.

Entry for the event was free although the festival helps raise money for the Fishermen’s Mission, RNLI, and The National Coast Watch Institution. Last year in 2015 the festival managed to raise over £500 for each of the organisations.

When is The Swanage Fish Festival?

The Swanage Fish Festival ran from 10th-12th June 2016. Kicking off the festival on 10th June was the ‘Fishy Friday’ event, where selected restaurants, hotels and cafes around Swanage featured special dishes on their menus to celebrate the start of the festivities. Details of all the participating eateries for 2016 are available in the official Swanage Fish Festival programme, which has a map of the area. Or you can view the official website here for more details on the participating eateries.

You can help support the festival by picking up a copy of the official programme for £1 from venues around the town such as Jenkins News, Arkwrights, Swanage Tourist Information and Pursenalities. All the money raised from the festival goes to good causes in the local area.

On Saturday and Sunday food stalls all around Swanage served up tasty fishy treats along with drinks. Saturdays fun and games started at 11am in the morning with the Swanage Library storytelling event. Every hour there was a new demonstration and event until the festival wrapped up for the night at 11pm. There was plenty of live music from 6pm onwards from guests such as Andrew Cannon Band, Red River Hoggs, Twenty Two and Reptiles.

Sundays festival started at an earlier time of 10:30am with ‘Foraging with Giuseppe’. There were plenty of more demonstrations throughout the day such as live music from the Harmony Rock Choir, Mosquitoes and Kelp from 2pm. The event finished a bit earlier than Saturday with the event coming to an end at 4pm.

There were a few famous faces at the 2016 festival this year including James Golding, chef director from The Pig. Head chef Peter Murt from Rick Stein Sandbanks was cooking up a feast for the festival crowds.

Be sure to keep an eye out on their official website for the the announcement of next year’s special guest chefs.

Obviously with the name ‘Swanage Fish Festival’ you can expect a lot of fishy treats and meals to be on show. But what if you don’t like fish? Well not to worry, on Sunday last year the Olive Tree cooking teacher Giuseppe Sinaguglia gave tips on how to forage from your own ingredients.

There was also a session with Claire Burnet from Swanage based Chococo that revealed how she makes her award winning handmade chocolates. If you’re not a fan of fish then the festival always has something else to offer for visitors.

With so many live acts and bands there’s plenty of live music to enjoy. If you really don’t like fish then don’t worry, there’s entertainment for everyone.

To find out more about the Swanage Fish Festival be sure to check their website and Facebook page for more details about next year’s festival and what you can expect.

Coming to the next festival?

Stay in one of our hotel rooms near Swanage.